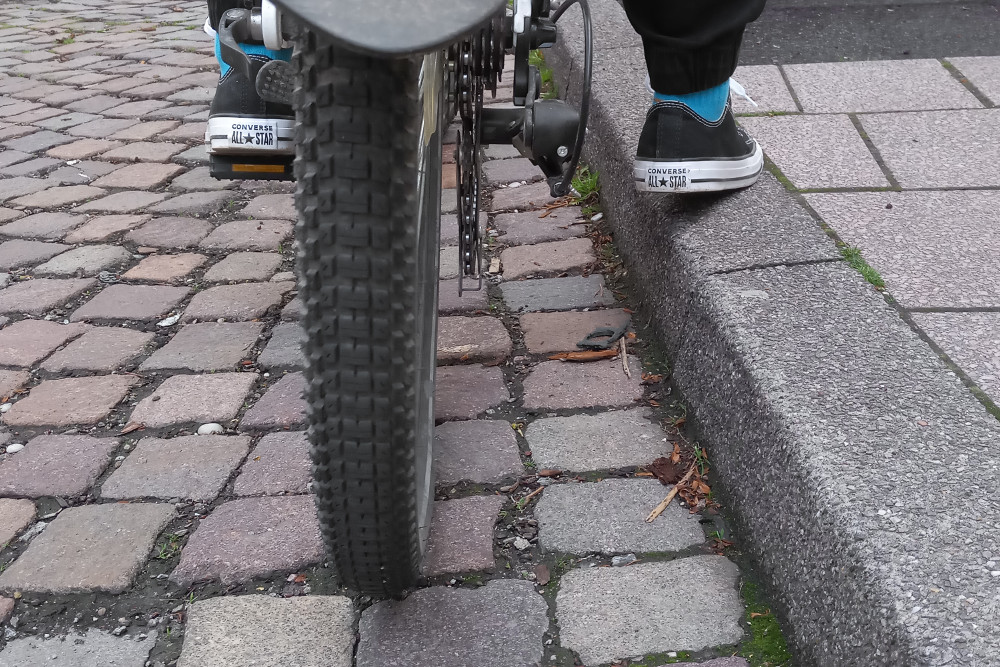 Not too far to the right

Unfortunately, there are still too many cyclists who ride too far to the right. This is inherently dangerous andone of the main reasons why people are afraid of riding a bicycle

The ADFC says around three feet, which is a little less than in the above calculation (lanes are narrower in Germany, around eight to nine feet). Using the rule of thirds has the advantage that you don't have to calculate or trying to think if you have toi measure from the elbow, the bicycle center or the right hand part of the handlebar.

Of course you cannot be dogmatic about the rule of thirds. It may not work on wider roads, where the base may be further to the right. Pcurves, tram tracks, parked cars and similar stuff has an influence on the position.

We can only give tips here, but no strong rules, as every infrastructure and situation is unique. In genera, thought, the tips are well suited. We do recommend to take the class, as the practical part is an extremely valuable piece in riding smarter.

Imagine the lane into three equalparts. To turn left, go into the left third. When you want to turn right, place yourself into the right third. For going straight, use the middle third. The latter is called the base position.

This may seem like taking too far to the left, but with a typical lane wifth of 10 feet and an assumed bicyclist width of 2 feet you end up with:

This video demonstrates proper lane positioning, which prevents motorists from passing too closely. The route goews downhill, through a railroad underpass, followed by a sharp 90-degree turn. Prevent to be passed in that turn, soince motorists will then come very close to you. After the turn, two right-turn lanes appear, there are two straight through lanes and one left-turn lane.

Important: Always scan behind before changing your lane position further to the left.

So, scanning behind, when it is clear move further to the left (if not clear, it helps to perriodically scan, communicate with drivers, make a hand signal to the left and move over when a motorist has acknowledged you and let you move over - there is always someone willing to slow down)

In this case, I move even further, almost to the center lane, just to make it very clear that passing is not an option here. Normally, you don't ride as far to the left. When approaching the turn it is ok to move back to the center position.

Important: When going straight don't ride exactly on the white line between the straight-through and the right-turn lane. It is tempting, because you seem to be further away from the cars, but you will actually be passed closely on the left AND on the right. If you stay in the center of the straight-through lane, then you will not be passed in-lane (there is a second straight through lane, so impatient motorisst can move over). You also won't be standing next to a car in case the light is red - but before and behind the cars.

Videoclip to riding a narrow section

This video shows how to properly ride a narrow section. The center position is very important here, to deter motorists from passing. You see a cyclist in this clip who rides very far to the right - and most likely would have been closely passed by the motorist, had I not ridden more towards the center.

The law was changed in Germany in 2021, requiring motorists to leave a gap of five feet (1,50m to be precise) when passing cyclists. The law required ther same before, but was only softly spelled out - now, the actual value was written into the law.

Cyclists can actively make themselves safer, to prevent motorists from passing too closely.

By scanning behind and letting the motorist know that you have seen them you also minimize the risk of getting honked at.
We use cookies

We use cookies on our website. Some of them are essential for the operation of the site, while others help us to improve this site and the user experience (tracking cookies). You can decide for yourself whether you want to allow cookies or not. Please note that if you reject them, you may not be able to use all the functionalities of the site.